The construction of a VPC plot for time-to-event data in Monolix requires several steps. First, Monolix simulates datasets using the population model, which contains the structural and statistical models and the estimated population parameters. Then, for each simulated dataset, it estimates the survival function with the Kaplan-Meier estimator for exactly observed events or Turnbull for interval censored. Because in time-to-event problems, time itself is an observation, simulated curves are interpolated on a fixed grid. As a result, at each time point of the new grid, there is a set of probabilities that events occur after that point. Finally, Monolix calculates lower and upper percentiles, which give a prediction interval.

To simulate a time when an event occurs, \(u\) is defined as a probability that an event \(X\) occurs before a certain time \(T\). This probability is computed using the cumulative hazard function \(H(t)\)

where \(H\) is a solution to the ODE system \(dH/dt = h\). A value of the probability \(u\) is sampled from a uniform \([0,1]\) distribution, thus in the above equation the time T becomes the unknown. A root finding method from an ODE solver finds its value.

The time T is not a given independent variable, but it is a simulated observation. Moreover, simulations are only till time \(T_{max}\), which corresponds to the last time found in the data set. This value is the final time in integration of ODEs for each individual and it also defines a unique right censoring time for all individuals in the simulated data sets. It is independent of the individual times of events or right censoring in the original data set.

Individual 3 in the original data set (table on the left) experienced an event at time 4. In simulations (tables on the right) an event for this individual can occur before or after that time, or may occur after \(T_{max}\)  (last table). Similarly, individual 5 left the study at time 3 without experiencing an event in the original data set. But in simulations, an event can occur before or after time 3. If an event has not occurred at \(T_{max}=5\), then it is right censored.

Monolix estimates survival functions for each simulated dataset. Depending on the event type, there are two methods:

To generate the prediction interval in the VPC plot, Monolix performs by default 500 simulations with N individuals as in the original data set. As a result, it produces 500 time series that form 500 survival curves (based on Kaplan-Meier or Turnbull estimators). Since simulated event times are random numbers, all estimated survival functions have different time grids (Fig.(a)). The interpolation of these curves on a fixed time grid allows to calculate the prediction interval (Fig.(b)). In Monolix the default time grid consists of a uniform grid with 100 points. For exactly observed events the grid includes in addition all time points from the original data set to provide all possible information. Exact event times are unknown for interval censored events, so dataset time points have no additional information. The interpolation on the new grid gives at each time point of the grid a set of probabilities corresponding to different simulated survival curves. It allows to calculate lower and upper percentiles (the 5th and 95 percentiles are a default choice) and draw the prediction interval (Fig.(c)).

The dataset contains times of exactly observed single events of 30 individuals. The survival model has a constant hazard function and the Kaplan-Meier estimator approximates the survival function. The VPC plot uses a linear approximation of the Kaplan-Meier curve (Fig. on the left). By default, the fixed grid has 100 uniformly distributed points together with all time points from the date set. The figure on the left presents the VPC plot with the default settings. The approximation of the empirical and simulated Kaplan-Meier curves is sufficient on the default grid. In contrast, the VPC on the Figure on the right uses a grid with only time points from the original dataset. The accuracy of the prediction interval is decreased.

In this dataset, the times of events from the previous example are the ends of time intervals within which events occurred. The length of the censored intervals is non constant among intervals, and oscillates around 5. The structural model includes this information in eventTime and intervalLength options. 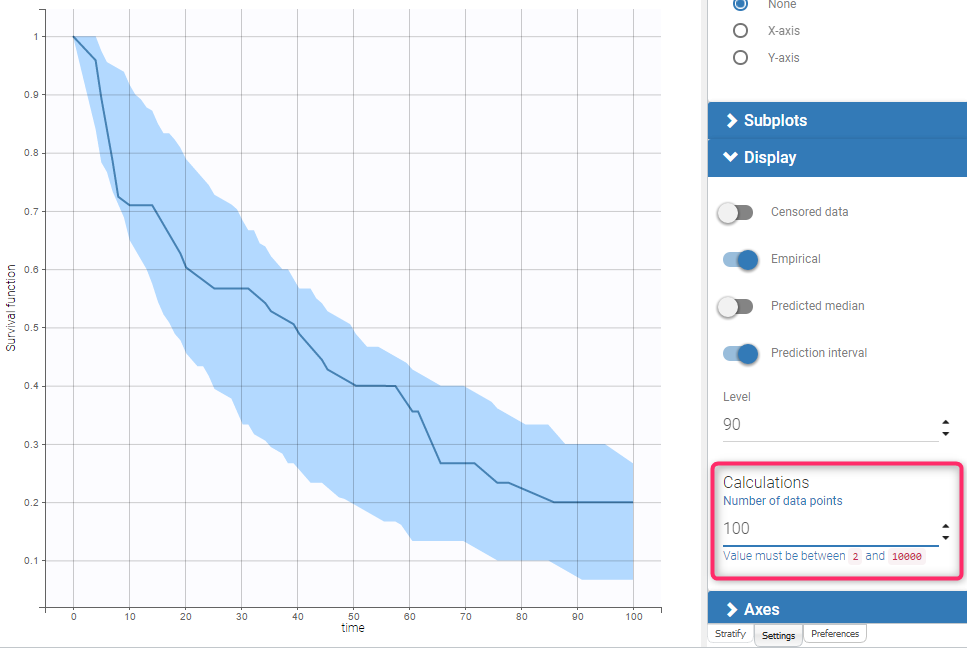 The Kaplan-Meier estimator is a standard method to approximate the survival function \( S(t) \). It describes the probability that an individual survives until time t, knowing that it survived at any earlier time. For single events, it is given by the following formula

On the left of the figure below, a typical example of a time-to-event data set contains information about exact times when individuals experienced an event or when they left the study (drop-out). Five individuals have two observations: the time at which the observation starts ( 0 for everyone) and the time of an event. If a patient leaves the study, then the dataset contains a drop-out time with 0, instead of 1, in the column for the observations. The patient didn’t experience an event but survived until the drop-out time. The Kaplan-Meier estimator takes into account such situations, because these individuals are not counted as individuals at risk (they are not counted in the denominator \(n_i\)) at later times.

The study starts at time \(t_1\). There are no events, so \(d_1=0\) and the value of the Kaplan-Meier estimator is 1. Until the next event time at \(t_2=1\), the estimator remains constant. At that time, one individual experienced an event, hence \(d_2=1\), and all individuals survived until that time so \(n_2=5\). As a result, the probability to survive decreases by 0.2. It is the height of the jump at \(t=1\) in the plot. The Kaplan-Meier estimator remains constant until the next event. At time \(t=3\) there are two events. The number \(n_3\) counts now only 4 individuals – it has decreased by 1 due to the previous event. The final probability at time 3 is a product of all earlier probabilities. At \(t=4\) there is a drop-out: patient 5 left the study without experiencing an event. The survival curve remains constant and a red dot marks the drop-out. The Kaplan-Meier estimator takes into account this situations, because at the next event time \(t=5\), this individual is not counted as an individual at risk – thus the denominator n will be smaller. Finally, at time \(t=5\), there is only one individual left, and one event, so the survival becomes 0.

The expectation-Maximisation (EM) algorithm is a technique to estimate parameters using “incomplete data”. For example, interval censored data can be used to estimate survival. The algorithm starts with some initial estimate and “expects” missing values, knowing the initial parameters. Then, it maximizes the likelihood considering the expected data as the given data. These processes alternate until some stopping criteria is satisfied.

The original Turnbull algorithm (1976) is the first and the simplest method to maximize \(L_S(p)\) with respect to \(p\). It is an application of the EM algorithm with two steps repeated until convergence:

Monolix uses this method to estimate the survival function in the VPC plots.

If events are exactly observed, then the NPMLE of S is equal to the isotonic regression of

The algorithm is the following:

Exactly observed events: the 4 individuals below are sorted in increasing order of the times of events or drop-outs, ie. \( 0<t1<t2<t3<t4\).

Interval censored events: the individuals are in increasing order of the times at which censored intervals end.

The time points of the lower and upper interval limits for all individuals are ordered in increasing sequence. In this example, the assumption is

The weights \( \alpha_{ij} \) are elements of the following matrix:

First iteration of the algorithm

Step 0: The initial guess is the upper bound curve, that is the Kaplan-Meier estimator under the assumption that events occur at \( U_i \), interpolated on the \( \tau – \) grid.

Step 1: The probabilities that events occur in the Turnbull intervals are 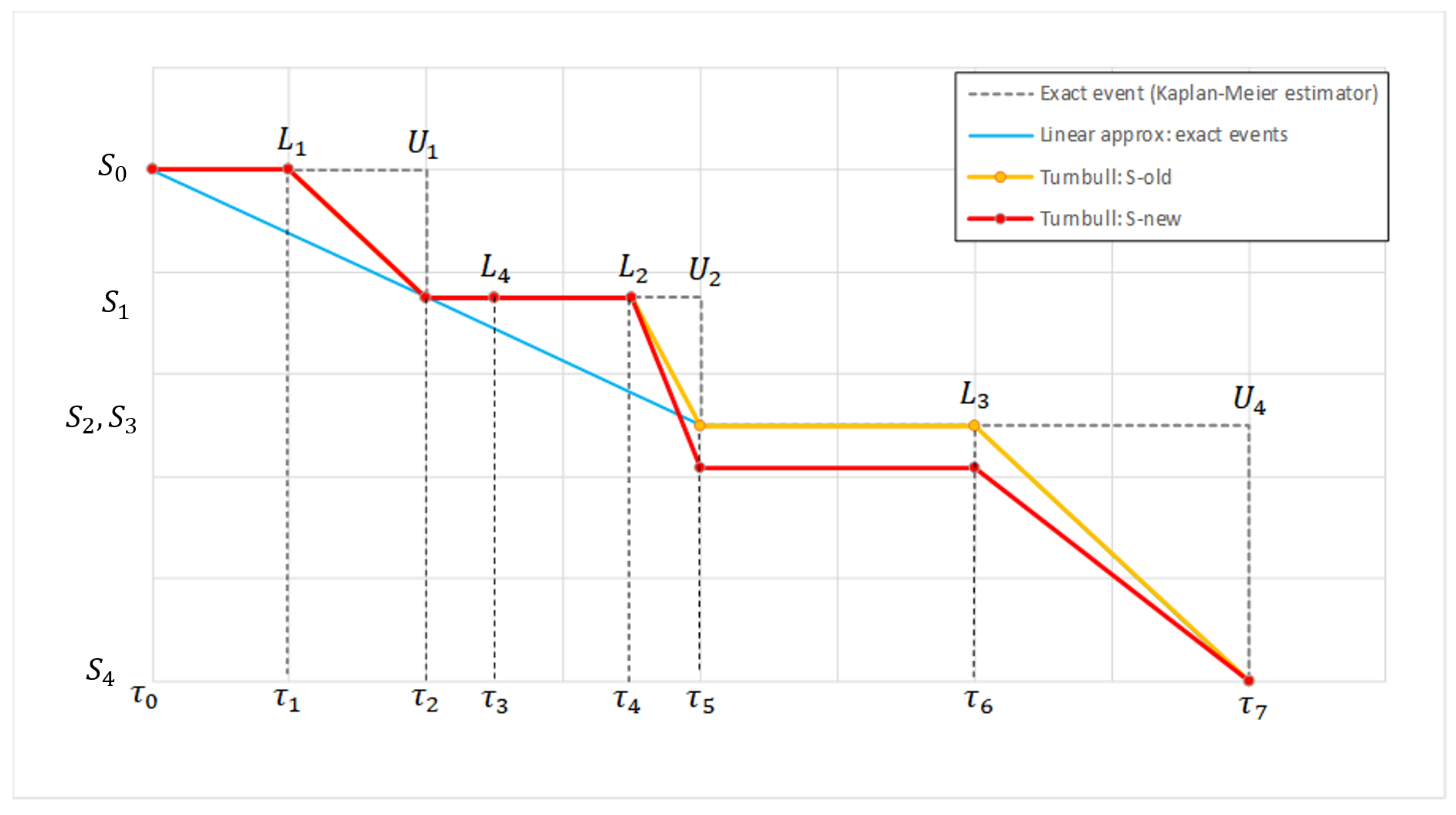