The standard errors represent the uncertainty of the estimated population parameters. In Monolix, they are calculated via the estimation of the Fisher Information Matrix. They can for instance be used to calculate confidence intervals or detect model overparametrization.

Calculation of the standard errors

The Fisher information matrix (FIM) \(I \) is minus the second derivatives of the observed likelihood:

This method can be applied for continuous data only. A continuous model can be written as:

with \( y_{ij} \) the observations, f the prediction, g the error model, \( z_i\) the individual parameter value for individual i, \( z_{pop}\) the typical parameter value within the population and \(\eta_i\) the random effect.
Linearizing the model means using a Taylor expansion in order to approximate the observations \( y_{ij} \) by a normal distribution. In the formulation above, the appearance of the random variable \(\eta_i\) in the prediction f in a nonlinear way leads to a complex (non-normal) distribution for the observations \( y_{ij} \).
The Taylor expansion is done around the EBEs value, that we note \( z_i^{\textrm{mode}} \).

The standard error for parameter \( \hat{\theta}_k \) can be calculated as:

The correlation matrix is calculated from the variance-covariance matrix as:

For the beta parameters characterizing the influence of the covariates, the relative standard error can be used to perform a Wald test, testing if the estimated beta value is significantly different from zero.

When running the standard error task, the progress is displayed in the pop-up window. At the end of the task, the correlation matrix is also shown: 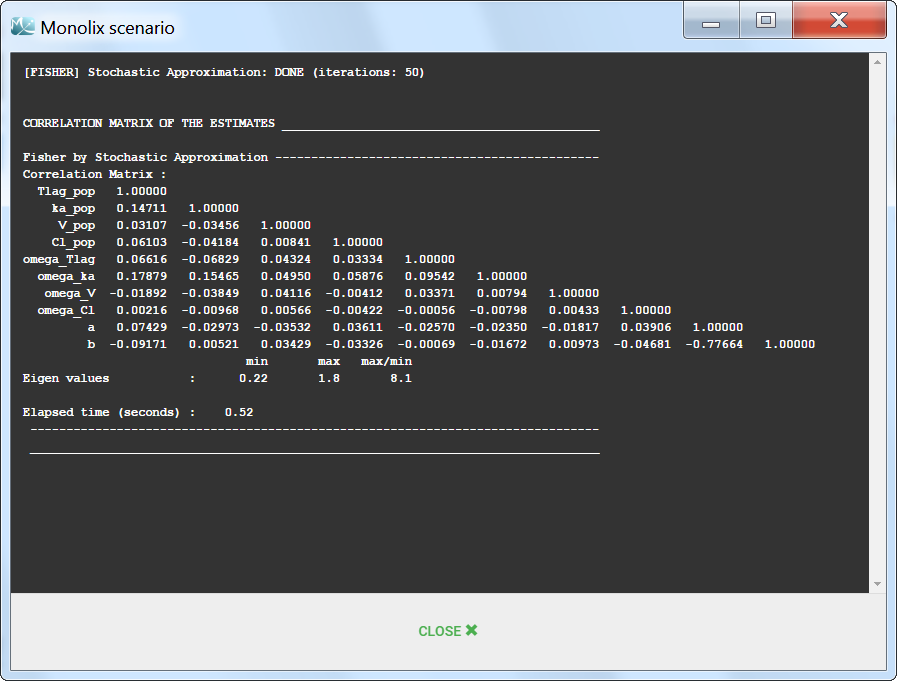 In the graphical user interface

In the Pop.Param section of the Results tab, three additional columns appear in addition to the estimated population parameters:

To help the user in the interpretation, a color code is used for the p-value and the RSE:

When the standard errors were estimated both with and without linearization, the S.E, R.S.E and P-VALUE are displayed for both methods. 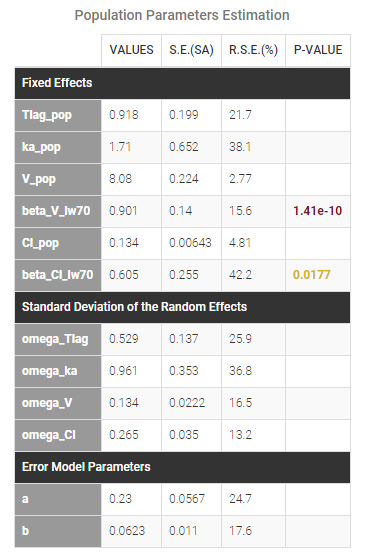 In the STD.ERRORS section of the Results tab, we display:

To help the user in the interpretation, a color code is used:

When the standard errors were estimated both with and without linearization, both results appear in different subtabs. 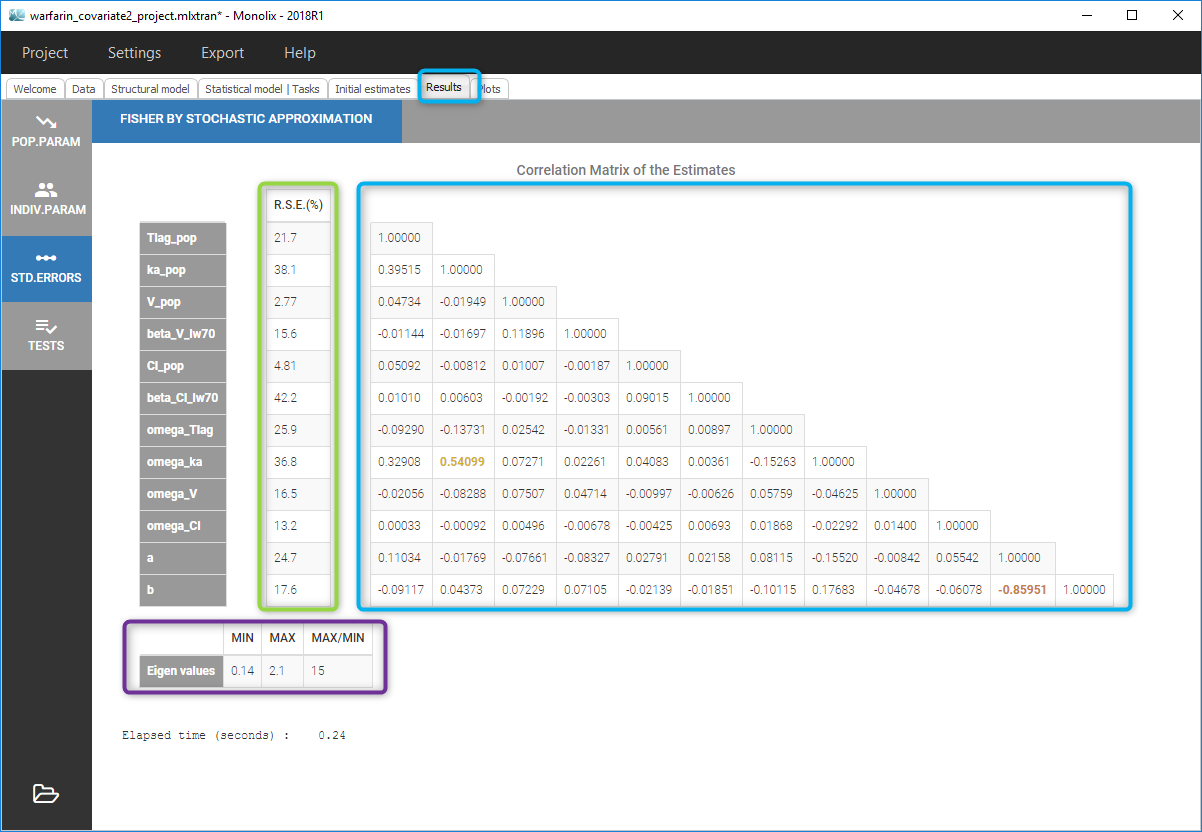 If you hover on a specific value with the mouse, both parameters are highlighted to know easily which parameter you are looking at: 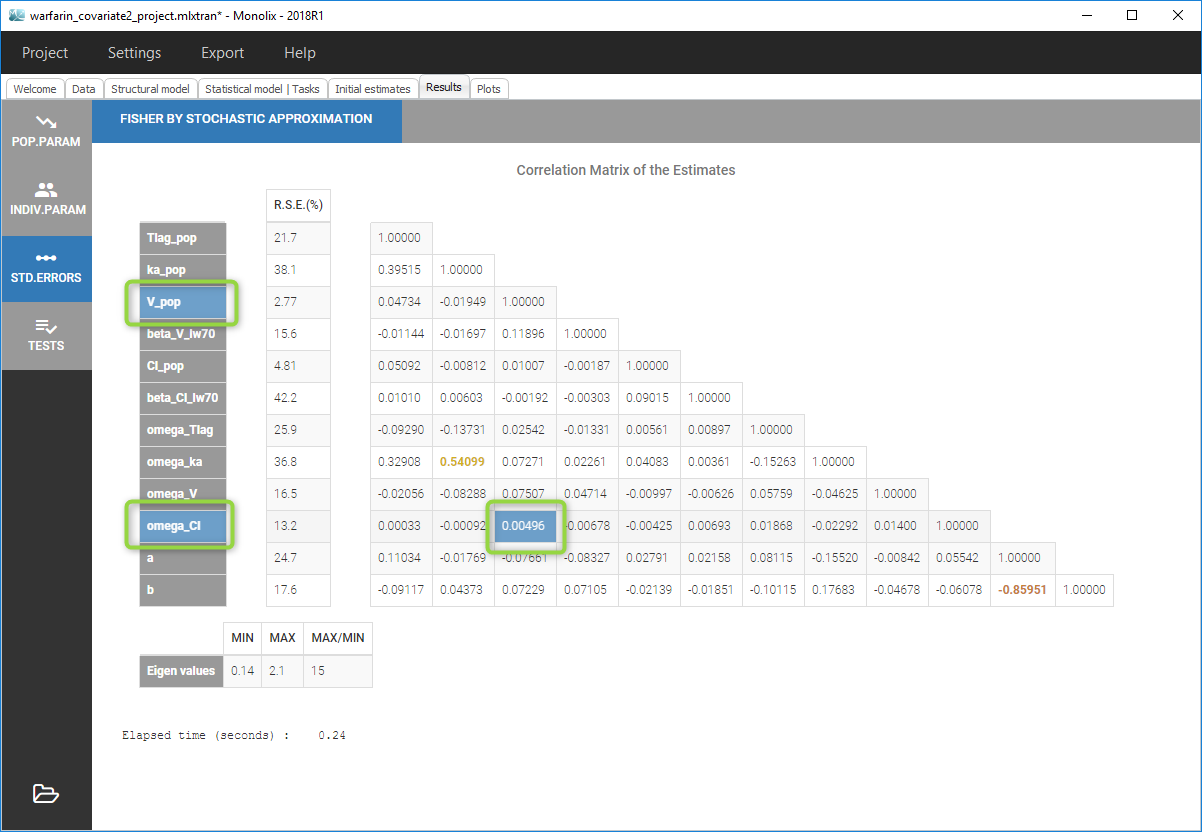 In the output folder

After having run the Standard errors task, the following files are available:

Interpreting the correlation matrix of the estimates

The color code of Monolix’s results allows to quickly identify population parameter estimates that are strongly correlated. This often reflects model overparameterization and can be further investigated using Mlxplore and the convergence assessment. This is explained in details in this video:

The settings are accessible through the interface via the button next to the Standard errors task: 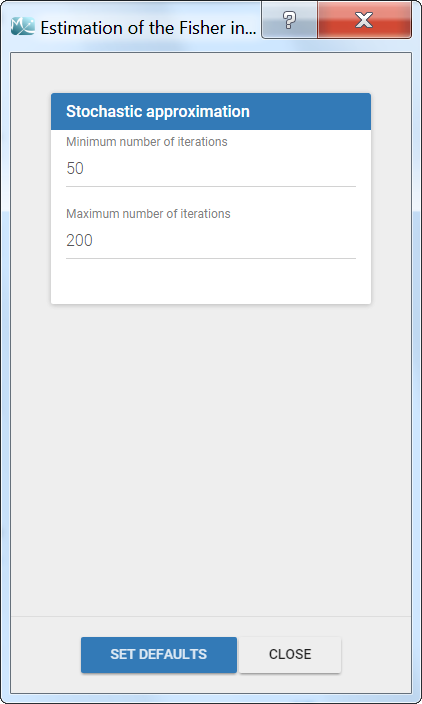 When to use “use linearization method”?

Firstly, it is only possible to use the linearization method for continuous data. For the linearization is available, this method is generally much faster than without linearization (i.e stochastic approximation) but less precise. The Fisher Information Matrix by model linearization will generally be able to identify the main features of the model. More precise– and time-consuming – estimation procedures such as stochastic approximation will have very limited impact in terms of decisions for these most obvious features. Precise results are required for the final runs where it becomes more important to rigorously defend decisions made to choose the final model and provide precise estimates and diagnosis plots.

I have NANs as results for standard errors for parameter estimates. What should I do? Does it impact the likelihood?