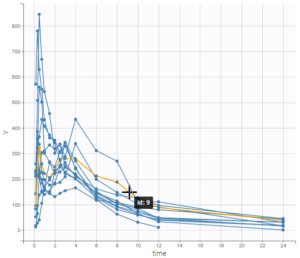 This case study presents the modeling of the veralipride phamarcokinetics. Veralipride plasma concentrations exhibit double peaks after oral absorption, and site-specific absorption has been suggested to be the major mechanism. In this case study we explore this hypothesis by setting up a population PK modeling workflow with the MonolixSuite. The step-by-step workflow includes visualizing the data set to characterize the double peaks with Datxplore, setting up and estimating two double absorption models in Monolix, with one model explored in Mlxplore, assessing the uncertainty of the parameter estimates to avoid over-parameterization, and simulations of the model with Simulx.

Veralipride is a benzamide neuroleptic medicine indicated in the treatment of vasomotor symptoms associated with the menopause. This case study is based on a data set of veralipride PK measured on 12 individuals, published in:

Multiple peaks in plasma concentration-time curves is not uncommon, but it can create difficulties in the determination of PK parameters. This phenomenon can be explained by different physiological processes. Some are discussed for example in the review:

In the case of veralipride, site-specific absorption has been suggested to be the major mechanism responsible for the multiple peaking phenomenon, with rapid absorption occurring in the proximal part of the gastrointestinal tract, followed by a second absorption phase in more distal regions. This hypothesis was tested with the use of a telemetric shuttle for site-specific administration of the drug into the small intestine.

In this case study we will explore both approaches with MonolixSuite.

In the 2nd part, the dataset is first explored in Datxplore. This graphical exploration allows to characterize several properties of the data set, such as the double peaks in plasma concentrations for some individuals, or the elimination phase.

In the 3rd part, we apply a model with a double first-order absorption, adapted from a single absorption model available in the PK library. We show step-by-step how to estimate the parameters, diagnose the model and bring adjustments. Because the data counts few individuals while the model requires many parameters, it is important to properly assess the uncertainty of the parameter estimates to avoid over-parameterization. We show in particular how to adapt the settings of SAEM to identify precisely inter-individual variability, and how to use the correlation matrix of the estimates and convergence assessment to identify over-parameterization.

In the 4th part, we apply and evaluate a model from the literature (Godfrey et al.,  2011), which assumes discontinuous input rate of the drug at two absorption sites. We show how to write this model in Mlxtran with ODEs or with PK macros. The behaviour of the model is then explored with Mlxplore. Finally, we build a modelling workflow in Monolix to estimate and diagnose the model.

In the 5th part, we choose the first model to perform new simulations in Simulx, in order to assess the effect of the drug in different ways in a large population.